A Brief Introduction to Idaho

Topography and geography are controlled by geologic structure and rock type. The topography of Idaho is varied and dramatic. The fundamental reasons for this diversity are geological: the recency of volcanism and uplift of ranges along normal faults. This rough topography reflects a complex geologic past.

The great topographic diversity of Idaho reflects the several geologic provinces of the area. The southeastern part of the state contains relatively high and moist mountains and valleys of the Idaho-Wyoming thrust belt. Much of southern and east-central Idaho north of the Snake River Plain belongs to the arid Basin and Range Province. The economic heart of agricultural Idaho is the irrigated sagebrush desert of the Snake River Plain.

North of the plain from Ketchum westward are the high and rugged mountains of central Idaho underlain by the intrusive rocks of the Idaho batholith. West of the batholith is the Idaho Suture zone and geologically complex accreted terranes of the Seven Devils and Hells Canyon area.  In central Idaho much of the land is multiple-use National Forest or wilderness and tourism has replaced mining and logging as the primary sources of income.

Near Lewiston, Idaho's Salmon and Snake Rivers have carved deep canyons into a thick pile of basalt lava flows, erupted in the last 17 milion years.  In the panhandle of North Idaho, continental glaciers have smoothed the topography, gouged out lake basins, and deposited piles of moraine and outwash which form dams behind which beautiful lakes are found.  The bedrock here is ancient sediment of the Belt Supergroup, which is host to the silver, lead, and zinc mineral deposits of the Couer d'Alene River area.

Water flows downhill, forming river systems, which effectively cover the earth. These drainage patterns assume great importance to humans, but in eastern Idaho they are in some sense geologic accidents: the result of streams finding routes across areas of recent volcanic activity and uplifted mountain ranges. In geologically mature landscapes, streams tend to follow geologic structure, but in the geologically young landscapes of southern Idaho, stream courses are often either superposed (that is running across older geologic structures that were formerly buried), or disrupted (deranged) by lava flows which act as dams.

River systems carve drainage systems downward toward their ultimate base level. Rivers in southern Idaho over the last twenty million years have drained across active and changing geologic provinces, which have profoundly affected them. In most of southern Idaho water flows into the Snake River and ultimately the Pacific Ocean. However, the Lake Bonneville basin of western Utah, southern Idaho and eastern Nevada is an area of interior drainage. Its base level is the ever-changing level of the evaporating Great Salt Lake.

Over the last seventeen million years, a topographic uplift or plateau, like the Yellowstone National Park area today, has moved northeastward across Idaho. This northeastward migration is caused by the southwestward movement of the North American tectonic plate over a fixed hot spot, or area of production of molten rock or magma. The passage of the topographic uplift associated with the hot spot produced a northeast-progressing highland, from which streams drained to the north and south. Thus, the Continental Divide, at the headwaters of the Snake River, has migrated eastward across eastern Idaho. Streams which presently drain toward the Snake River Plain, from the north and south, formerly drained away from the volcanic plateau. 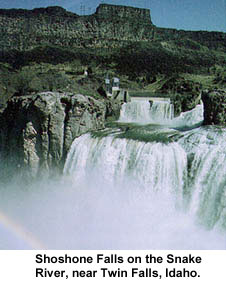 Subsidence of the plateau in the wake of passage of the Hot Spot allowed the Snake River to carve its west-flowing course along the southern margin of the lava field, and resulted in capture of streams which formerly drained south and east, away from the highland. Marsh Valley, among others, formerly drained southward toward the Lake Bonneville Basin, and has only drained northward through Portneuf Narrows since the Hot Spot passed to the northeast of Pocatello several million years ago. It is as if the west-flowing Snake River, over the last few million years, has eaten its way eastward, capturing the water of drainages to the north, east, and south, and, now, with the help of irrigation systems less than 100 years old, spreads that water on the fertile soil of the Land of Famous Potatoes.

The great river systems of the American west were the routes of Native American trails for hundreds of years before the advent of Europeans. They became railroad routes in the late 19th century.

The routing of the Oregon Trail along the Bear and Snake Rivers was primarily controlled by earlier Native American and trapper's routes, combined with the fact that wagons could not negotiate rough lava fields. The Hudspeth Cutoff, on the other hand, was a direct and geographically arbitrary route located with little prior planning. Between Soda Springs and the Raft River Valley, it cut across six mountain ranges, far from reliable stream systems, and is today not followed by any hard-surface roads.

Later, when the Utah & Northern Railway was constructed, it followed the path of the Bear River north to Cache Valley, and then the Lake Bonneville Flood route north to Portneuf Narrows, the site of Pocatello Junction, and the Snake River Plain. From there the railroad followed the Snake River north to Eagle Rock (Idaho Falls), and then the basalt lava plain to Monida Pass and Montana.

The Oregon Short Line mainly followed the Oregon Trail from east to west across Idaho. Where the immigrants' wagons headed north at Soda Point to avoid the Gem Valley lava field, the rails headed directly across Gem Valley and down the lava-filled Portneuf River Canyon past Lava Hot Springs and Inkom to Portneuf Narrows. The railroad also cut directly west across the basalt lava plain from American Falls to Shoshone.

Enjoy exploring the diverse aspects of the state described above,
and many others also with the Digital Atlas of Idaho!

Home | Site Index | Search | Contact Us | Links
The text and images above are excerpted from Rocks, Rails and Trails and the Guidebook to the Geology of Eastern Idaho. Visit the Atlas on-line editions of these books for in-depth discussions of Idaho Geology and Historical Geography.